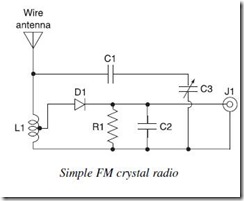 The FM crystal receiver circuit, shown in Figure,looks almost identical to a classic AM crystal circuit;but look closely, there are a few major changes.The FM crystal radio is relatively easy to build andcan be built on a small block of wood as shown. The

components values for the “tank” or resonant circuitwere reduced to resonate at higher frequencies in theFM band. This was done by experimenting with smallerand smaller coils and capacitors values.

The antenna is also much reduced in size (from that of AM crystal radio)to resonate at higher frequencies. The antenna is actuallya 7′′ long bare copper wire. The coil at L1 is just four

turns #18 copper or silver wire, 12 mm inside diameter,tapped at 2.5 turns, The coil was wrapped around a “magic marker,” then slipped off and expanded. As you can see, this is far different than the 150 turn coil for the AM crystal radio. The detector diode, once again, is a 1N34 germanium diode and not a silicon diode, or you could use a galena crystal as a detector if you desire. Capacitor C3 is 18 pF, but is not critical and can be 10 to 50 pF. Resistor R1 is a 47k ohm, 1⁄4 watt, 5% carbon composition type. The air variable capacitor, used in the prototype, was an 80 pF variable type and it had two trimmers in it which should be adjusted for best reception.